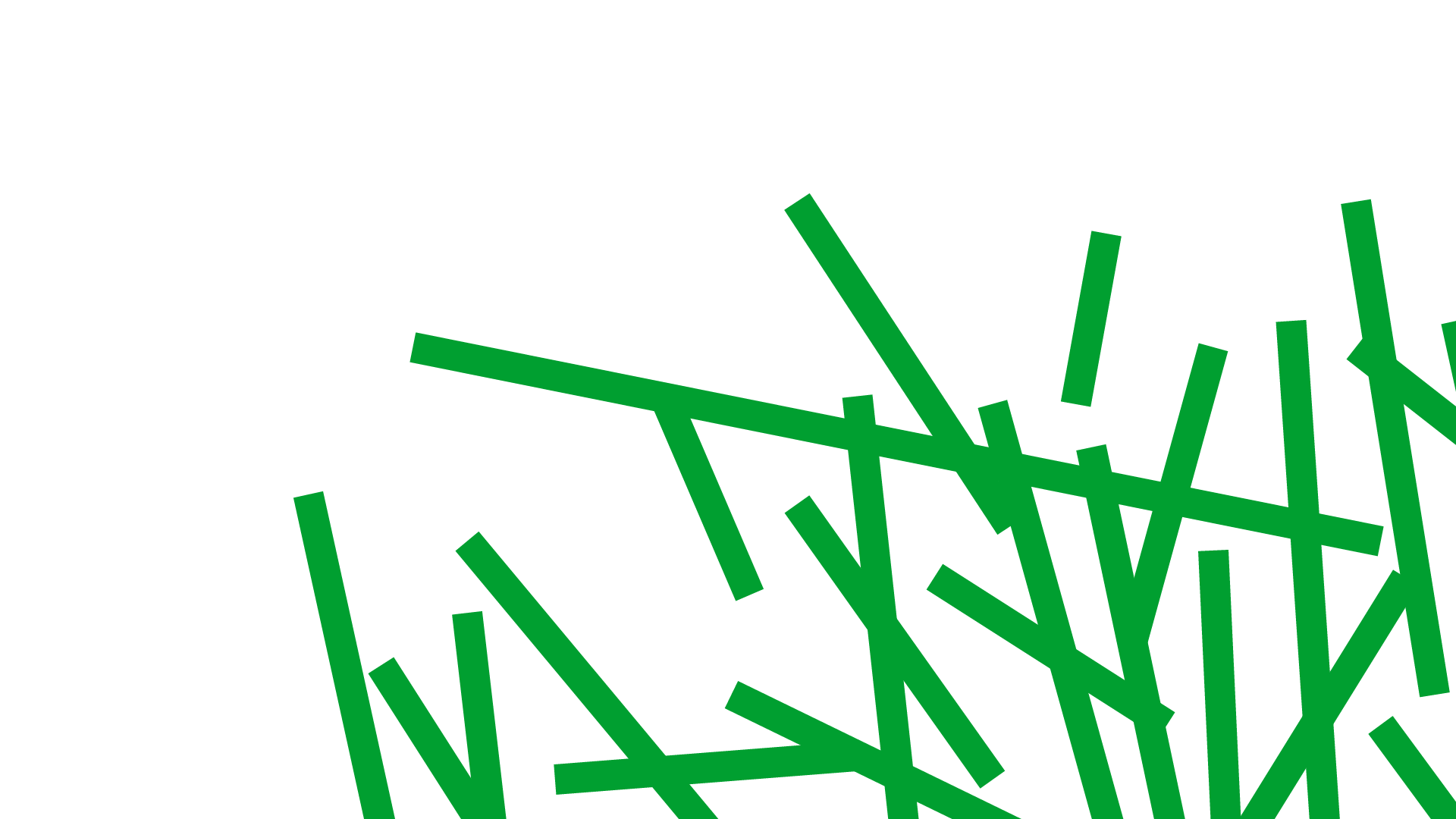 I identify art with the creation of new and unique worlds in paintings, drawings, or a stage or set design. In understanding the notion of creation, for me stage design is an important element, as in my view it is the only field of art allowing one to develop skills of proper assessment and analysis of the surrounding world. It forces me to ask relevant questions regarding human existence and then – to answer them. I have to note here that there are as many answers as there are people concerned. The conclusion we arrive at is about truth, or rather that there are many truths, as there is one in each of us. Coming to such a conclusion provides enormous possibilities for the development of art. Passion and an understanding of it inspires actions related to creativity. Art results from the passion for creating through exploration of oneself, which is confrontation with reality – we discover empty spots within us and are able to name them, and these are longings. It so happens, however, that a longing is undefined because we do not know the object for which we long, and learning its shape takes time. And yet, with every moment something changes and thus affects our transformation, creating a new image of ourselves and the world around us.

Thanks to Patryk Kowalczyk’s determination and persistence he was able to focus his degree piece on the history of Polish aviation in exile. He managed to obtain the screenplay of an unrealised film on the subject – titled Fragile Glory. That allowed work to commence on a professional script.
The difficulties encountered along the way resulted from the fact that it is a historical film, set during the Second World War in Britain – a country whose architecture and culture significantly differs from continental Europe. He also had to deal with the community being portrayed: Polish aviators and their British colleagues. This all made up a world new and alien to the young stage designer. As far as I know, he has not been to Britain yet.
The film screenplay is in fact the history of the Battle of Britain – a tale of a big, epic battle, material for a high-budget film. The author assumed that the entire film would be produced in Poland. Thus it was here where he had to block locations, build outdoor and studio sets and select natural objects for adaptation into props. In the studio he designed the interiors of two British houses, varying in nature, a suburban and a country one, to reflect the class differences between their owners. These are the Benett’s house and the Whistlers’ house. Also in the studio an “operations room” emerged – the decision-making centre of the airfield. The degree candidate chose the airfield in Piaseczno near Radom as the site for the individual locations. Such sets emerged as an officers’ mess, a building for women’s services and a housing barrack for pilots. They all take part in the film from both outside and inside, as dictated by the requirements of the screenplay. After a long search, suitable locations were found: selected interiors of the Modlin Fortress and a hospital in Milanówek. An important studio set is a cockpit, locked in a ruined building.
It serves as the background to a protagonist’s recurring dream in which he cannot prevent the death of his family. The set designer’s tasks also included designing a set portraying the airfield after an air raid, with mock-up planes.
Patryk Kowalczyk’s design is a well-thought out, professional proposal for a set design for a big, high-budget feature film. I hope that he will be making such
films one day. 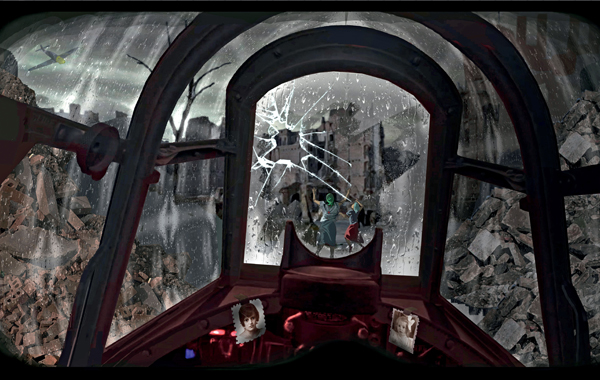 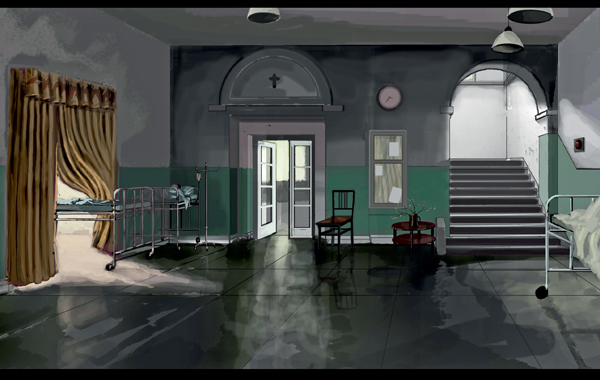 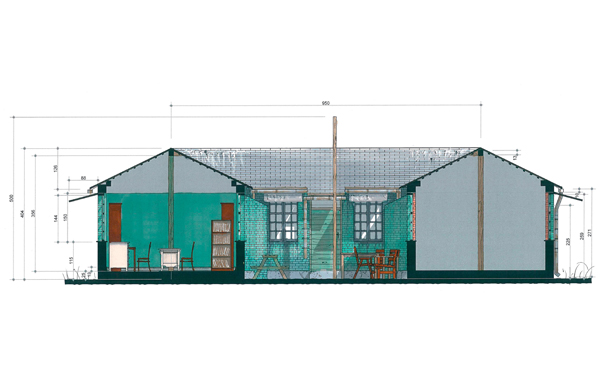 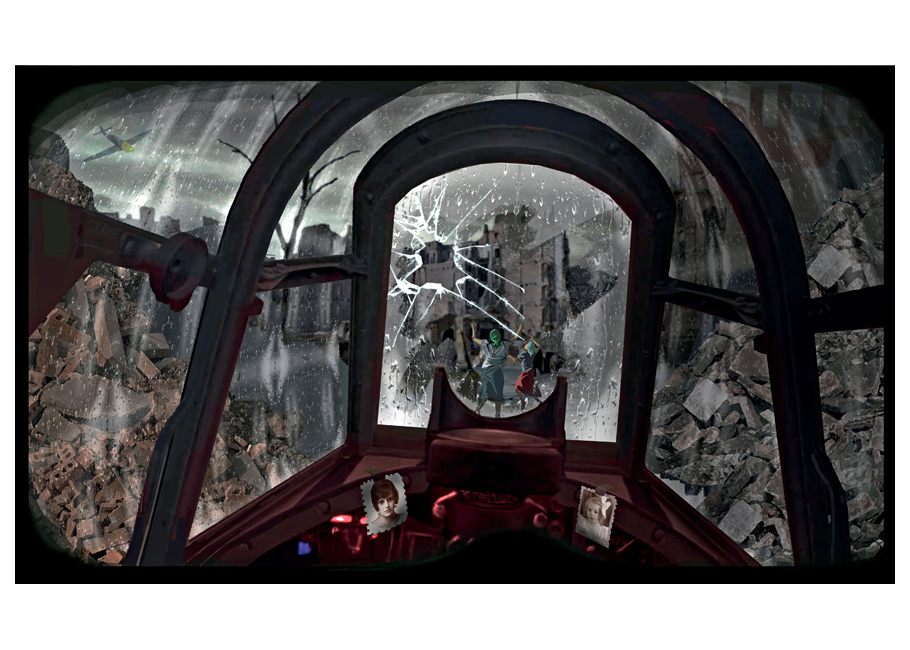 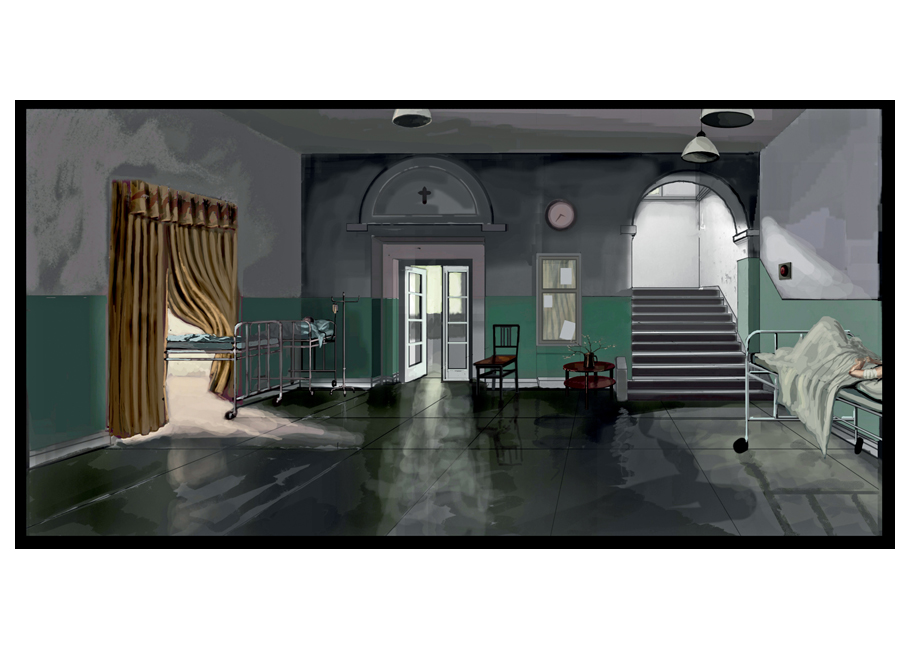 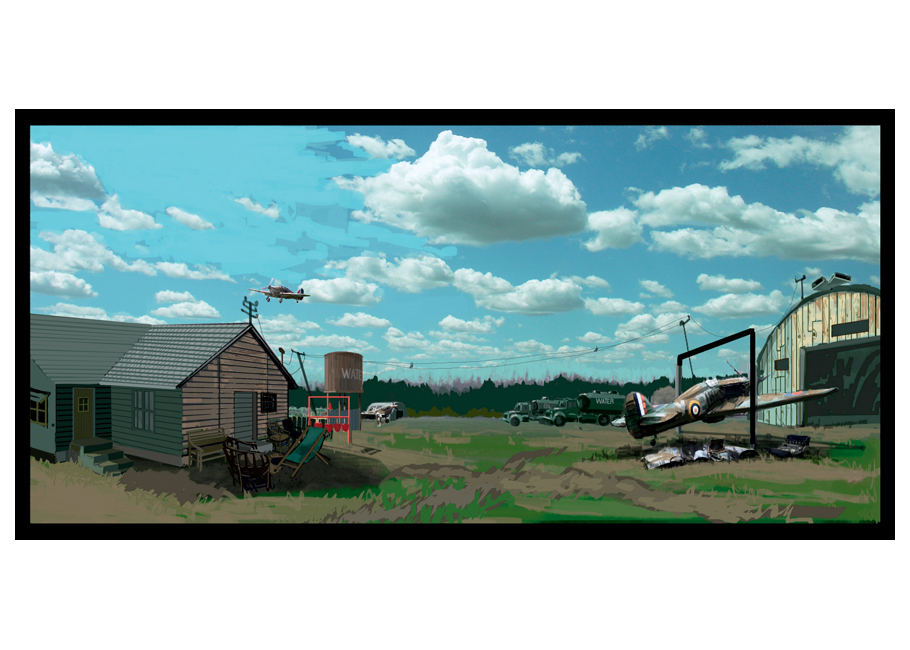 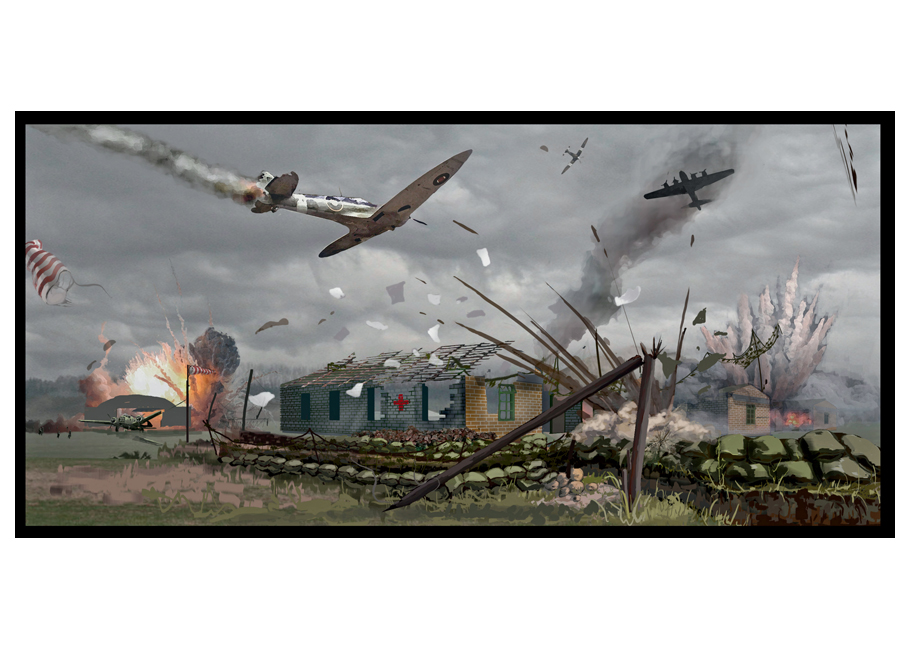 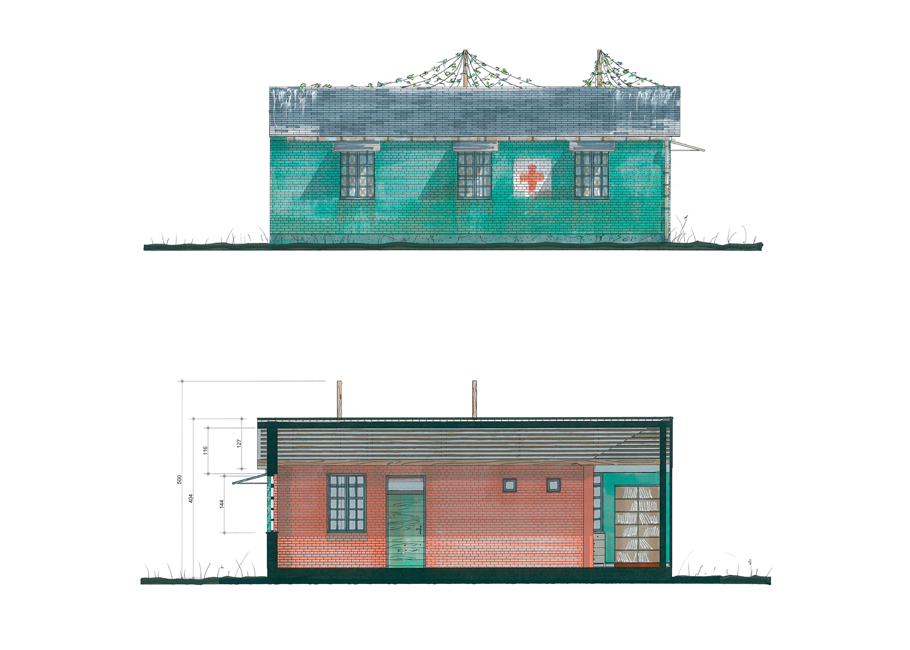 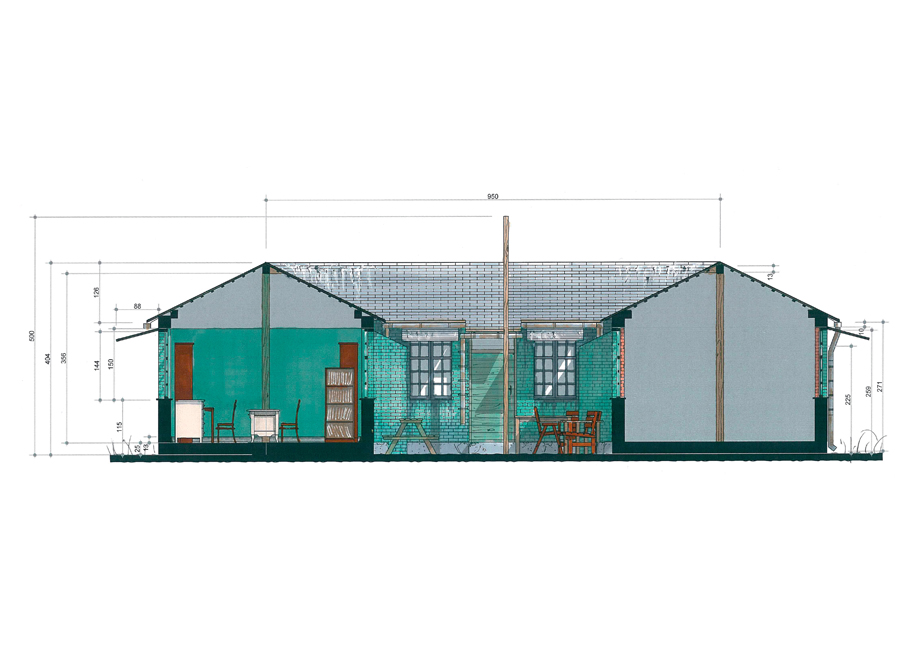 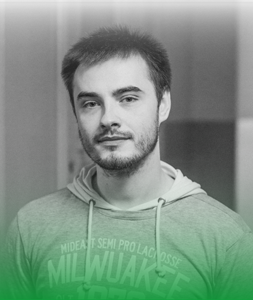 B. 1985, studied at the Faculty of Painting of the Andrzej Frycz Modrzewski Cracow College (2005–2007) and at the Faculty of Media Art and Stage Design of the Academy of Fine Arts in Warsaw (2007–2012). Solo painting exhibitions in Wierzbica (2002) and Radom (2003). His realisatnions include: arrangement of interior and lighting installation for the exhibition Unreal Dreams, the Avant-Garde Institute, Warsaw, 2010; stage design and costumes for production Ubu the King, the Wolandejski Theatre, Warsaw, 2011; graphic design of stage design for the Netia S.A. commercial, 2012. Jan Moskal Award, New Scenography Festival, Katowice, 2012. 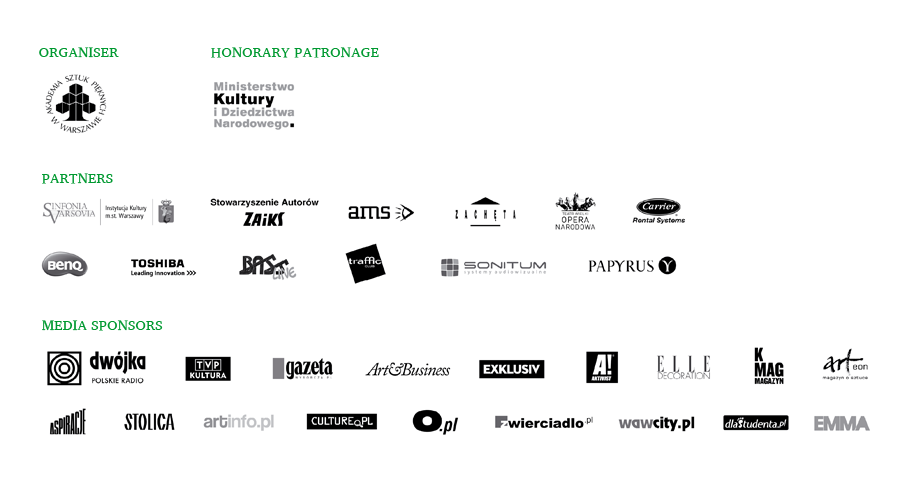